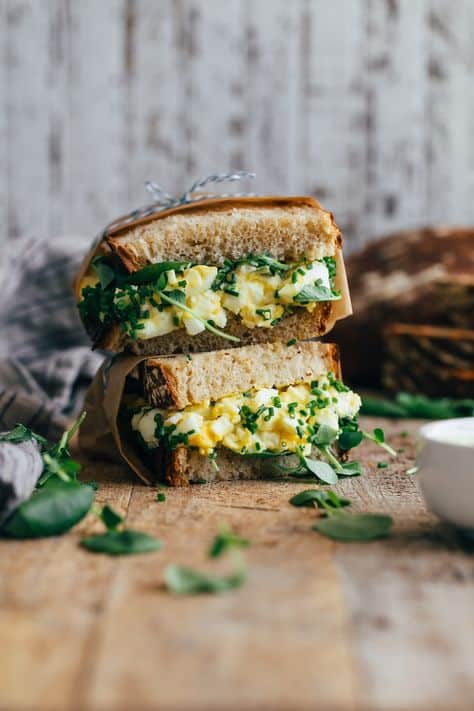 Historical Tidbit: Adapted for the screen by Andrew Davies, the Sanditon miniseries is based on Jane Austen’s last novel, which was partially written at the time of the author’s death in 1817.

Another option for classic finger sandwiches is watercress egg salad, tasty addition to your traditional English tea menu. And with only a handful of ingredients, it won’t take a fortnight to make them. This recipe uses sourdough bread, a healthier option compared to regular white bread thanks to the enzymes in the sourdough culture, which help boost digestion.

A fun way to transport yourself into Jane Austen’s world of the early 19th century lords and ladies, enjoy them on their own as a snack or together with other finger sandwiches like cucumber & cream cheese, or smoked salmon & cream cheese.

Along with scones topped with clotted cream and jam, your favorite tea such as Earl Grey or English Breakfast, and a bowl of fruit, these light, and delightful sandwiches are the perfect savory addition to your afternoon tea.

Fun fact: Starring Rose Williams as the lively Charlotte Heywood, the actress initially turned down a supporting role due to scheduling conflicts but later on had a chance to audition for the lead role.